What is the simplest remote control for Sky Television?

People love the ability to have hundreds of channels on demand but some members of the household may find the buttons on their Sky remote too small, and the large selection of functions to be overcomplicated.

"Is there a simple remote control that is compatible with Sky?" Is a question that we get asked often by our customers.

Here we will review both of our remote controls & rate them on their usability with Sky television. 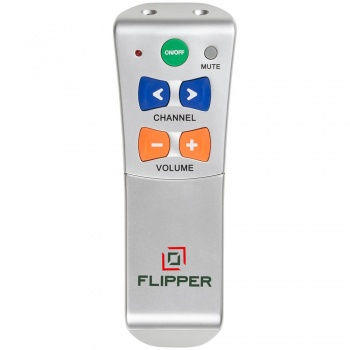 The Flipper remote control comes with programming codes for Sky boxes, and also has a host of other unique features that are perfect for Sky.

The HandleEasy has no problems with compatibility when being programmed for Sky television set-ups.

The is a "learning" remote control. This means that it learns signal codes from your existing remote control, resulting in a slightly more difficult set-up process.

Each button must be individually "paired" with the correct button on your existing remote control.

This process can take longer than most universal remote controls, however, the HandleEasy comes with full instructions.

The HandleEasy has very little features, this can be viewed as either a positive or a negative.

The buttons are also very basic, the lack of a number pad means that viewing Sky television can be tiring; to reach channel 401 (Sky Sports) from 101 (BBC 1) you have to press the Channel Up button numerous times, this can be extremely frustrating for users that like viewing the complete range of Sky television.

The HandleEasy is arguably the easiest remote control to use on the UK market.

The ease-to-grip design, along with soft & large buttons, and large white writing on a black background, all make the HandleEasy exceptionally useful for people with limited dexterity and/or poor vision.

The Flipper wins this competition by default, that being said, it is one of the few universal remote controls that is compatible with Sky that is sold in the UK, and it is by far the easiest to use.

The final question: Do you need Sky television?

The truth is that some users would be better off downgrading their television viewing experience to Freeview for the following reasons:

That being said, it does depend completely on the individual household & their requirements.

If you have any questions, comments, or feedback, please leave a reply below, alternatively, you can always Contact Us.

AlzProducts is rated 4.7/5 on Reviews.co.uk by 3321 verified customers (read reviews)